A Year in Review - 2022 Key Accomplishments

The 2022 year cumulated in international recognition from industry peers with Amex Exploration winning the prestigious Exploration Company of the Year Award at the Mines and Money annual Gala Dinner, London in December. To achieve this recognition, Amex Exploration began the year by completing a $49.6 M flow-through financing using the charity flow through structure, resulting in lesser dilution for shareholders. The money raised is financing an aggressive 2022/2023 exploration program that is building gold ounces on the known gold zones at Perron and focusing on new discoveries. Amex conducted a total of 104,639 metres during 2022, which was one of the largest drilling programs conducted in Canada. Figure 1 displays the overall growing gold footprint at Perron, with all intercepts and identified zones drilled to date displayed in a plan and longitudinal view. 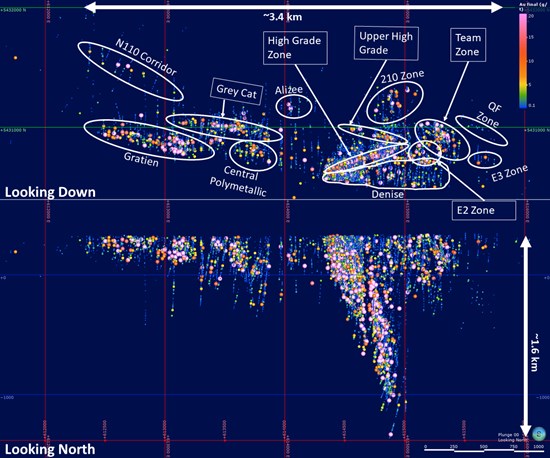 Figure 1: Plan view (top) and longitudinal view (bottom) of the overall gold system at Perron as at year-end 2022. Shown are individual gold sample intercepts over variable widths. All intercepts below 0.1 g/t Au have been removed, and all remaining intercepts have been capped at a maximum of 20 g/t Au. Note that the longitudinal section covers 500 metres of N-S width, and the plan view projects all drilled intercepts to surface.

During the year Amex also expanded the Denise Zone by a further 450m to the east for a strike length of at least 1 km. The drill results indicate the potential for higher grade shoots forming within the eastern Denise, similar to what has been defined in the western Denise. Earlier this year, on May 9, 2022, Amex reported Hole PE-22-510 intersecting 30.90 m of 11.57 g/t Au which is one of the best intersections drilled to date in the Denise Zone.

In addition to drilling success, Amex achieved the UL 2723 ECOLOGO® Certification for Mineral Exploration Companies, an important accomplishment in the Company's ESG strategy. Amex also conducted an environmental and social initial scoping study with Groupe BBA Inc. on the Perron project with positive results. This is an important step in project development and future permitting. The Company also expanded the on-site infrastructure with a number of roads that provide year-round access to the eastern portions of the Beaupre block including the Denise extension and the E2 gold zone.

Amex is also pleased to announce that it has completed the first-ever property wide geochemical surveys over the Perron project. Over the summer, a spruce-bark biogeochemical survey was conducted for which results have been received. The Company is intrigued by the preliminary results and has contracted external geochemists of Vision Geochemistry Ltd. to review the data and provide potential exploration targets. Amex also completed a nearly property-wide weak-leach soil survey, for which results are pending. The results of these two surveys will provide the basis for the 2023 summer regional exploration campaign and may provide drilling targets for regional exploration this winter if targets are compelling once interpreted.

"For the coming drilling season, we will be focusing on the eastern portion of the Beaupre Block where we see excellent expansion opportunities," said Kelly Malcolm, VP Exploration at Amex Exploration. "This area is proving to be particularly auriferous as we define the Denise Zone to the east and to the south, better define the new Team Zone as well as work to make new discoveries. We are also excited to test the continuation of the Beaupre rhyolite to the east, where the Perron and Normetal faults meet. This area has not seen any drilling and has significant gold potential." 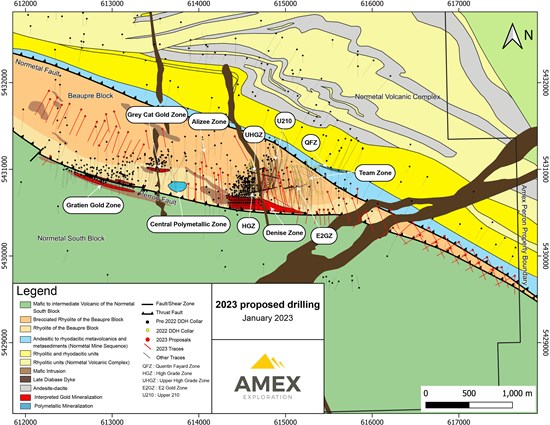 Amex Exploration Inc. has made significant gold discoveries on its 100% owned high-grade Perron Gold Project located ~110 kilometres north of Rouyn-Noranda, Quebec, consisting of 117 contiguous claims covering 4,518 hectares. The project is well-serviced by existing infrastructure, on a year-round road, 10 minutes from an airport and just outside the town of Normétal (~8 km). In addition, the project is in close proximity to a number of major gold producers' milling operations. The project host both bulk tonnage and a high-grade gold style mineralization. Since January 2019, Amex has intersected significant gold mineralization in multiple gold zones and discovered copper-rich VMS zones.

To view the source version of this press release, please visit https://www.newsfilecorp.com/release/150642